How did this woman have the bare faced cheek (pun intended) to complain. she was clearly the aggressor and caused the poor man to defend himself and he showed great restraint. I also must sa

You surely did not watch the video. She was the aggressive one. 50 baht may be huge for the Thai people making an honest living. It is more sad that this woman is arguing because of 50 baht. How entit 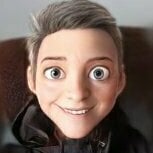 Another tourist who thinks their privilege allows them to act the fool. Whomever argues over a 50 baht fee probably deserves to reap what they sow.